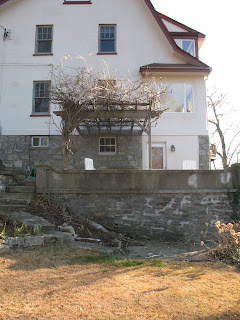 We are taking down down our Japanese Wisteria now that we know that it is not a native to our area.  It is an invader.  In the words of Douglas W. Tallamy who wrote "Bringing Nature Home:  How You Can Sustain Wildlife with Native Plants"  Japanese wisteria is invasive to the North East and discourages native plant growth.  Also, our native insects do not eat or use alien plants like this Japanese wisteria.  This is why landscapers often refer to these non-native invading plants as "Pest-free" ornamentals.  But not only are they "pest-free" they are largely inedible to native insects and birds.

We must now try to figure out which native vine we will use as a replacement.

A good book to read about how to replace invaders with native plants is the Brooklyn Botanic Garden All-Region Guide called "Native Alternatives to Invasive Plants".  They recommend we plant instead American Wisteria (Wisteria Frutescens) or the Kentucky wisteria (macrostachya).
Posted by Mary Chamie at 8:57 AM