We Plan for Irene

Just south of us, some 7 miles from here, is the northern border of New York City.  We hear through the news that New York City is evacuating some 300,000 people who reside in areas where flooding might occur from the storm  This is what their evacuation zones looks like that they have put into place:

We are up the Hudson River some seven miles beyond the map at Hastings on Hudson. Up here, we do not have evacuation plans,  But many of us work in New York City in areas that are zoned for evacuation, like our son who works near Battery Park, or our friend who owns a business down near the water on the East Side of Manhattan..

The Hudson River could flood here in Hastings on Hudson.  But our home is up on the cliffs overlooking the river and facing the Palisades. We do not expect to have problem with flooding like the lowlands might.

It is possible that we might get strong gusts of hurricane winds that topple trees because the tree roots have lost their hold owing to heavy rains. It is also possible that we could have wind damage, considering our height above the river.  But as of now, this is all speculation.

In any case, most of us are hunkered down and are following instructions to get to safe quarters and stay there until the hurricane passes by.

We can forget about public transport in NYC this afternoon because they are shutting down the subway system, stopping the buses and also the Metro rail lines.  That is really amazing.  New Yorkers are big public transport users. I cannot imagine what people will do if they want to get around.  New Yorkers are also good walkers and bikers, which they might do as a last resort.

When all transportation pretty much stopped on September 11, 2001, many of us put on our shoes and walked out of the city.  So it wouldn't be the first time that walking would become the "transport of choice".  However, given the size of the storm expected, I imagine that people won't walk around much either.

I just went up to our attic and took a video of how our skyline looks this afternoon.  When the film starts, we are looking Northwest toward Nyack and the Tappanzee Bridge on the Hudson River.  when the film ends, it is aimed south toward New York City, almost to the George Washington Bridge.Tomorrow, I will try to photograph this same scene again to see how it changes.  Here is a video of our skyline at 3:30pm today taken from our attic..


SKY LINE AT HASTINGS ON HUDSON

Our public library is on the river, next to our train station into the city, a 32 minute train ride from here. One looks down at the Hudson River.  I noticed that big ships had come down the Hudson River to get away from the potential violence of the ocean these next few days. 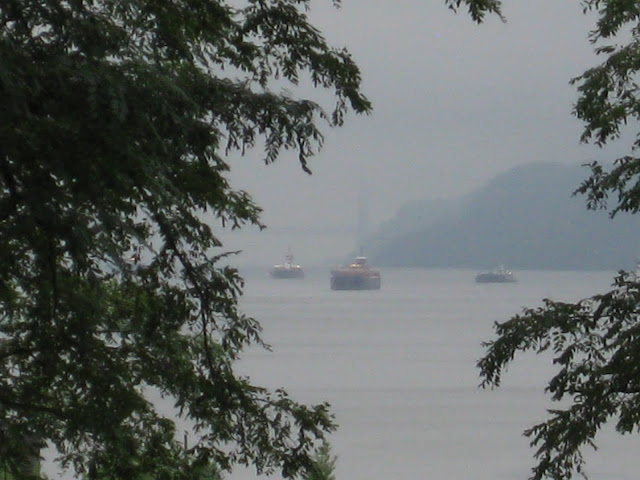 Big ships were coasting into the river, and just hanging out there, for the moment.  You can see them through the trees from the Hastings Library.


Although not deserted, our village is almost completely empty of people.  Few cars are in the area. 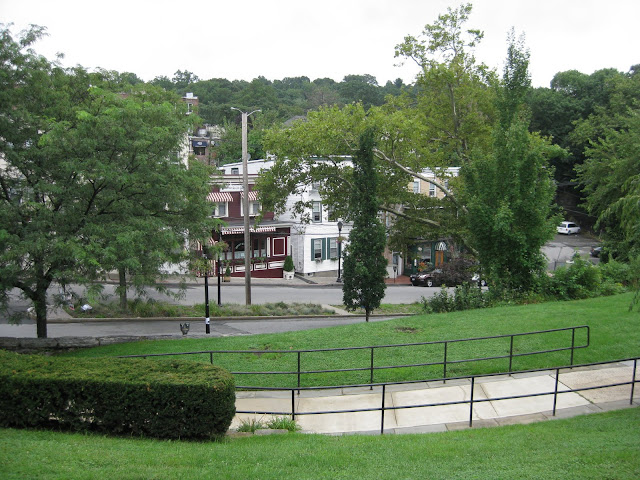 And the library is closed on Saturday, which is most unusual.


This is how we look today, the day before Hurricane Irene is supposed to hit us.  She is due here in our backyard at 8am.  So when we get up in the morning, I will try to re photograph a number of these places so that you can see the difference.  Until then, pleasant evening!