Hole in the Wall, Abacos: A Magnificent Place

We knew it was going to be interesting.  We heard that it was  beautiful.  But we were still not prepared for what we found. Hole in the Wall is a jaw dropping beautiful slice of wild, raw nature. 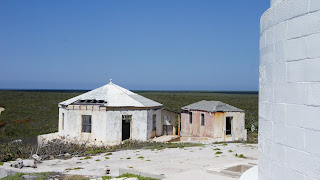 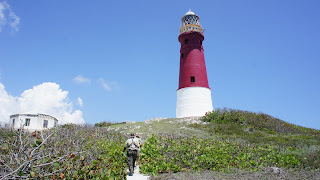 There isn't much man-made entertainment there.  In fact there are no coffee shops, no restaurants, no stores, no shops, no tourists, no roads.  We didn't see another person on the entire trip, other then ourselves.  When we arrived, we looked up the two-track dirt path and saw an abandoned light house, three ruined buildings and an old sidewalk ambling to the beach.  Yet we were completely entertained by the natural site, it's beauty, its solace, its grace, its  solitude, its immensity.

Our trip to Hole in the Wall started when six of us were picked up at 8:30 in the morning by Abaco Nature Tours.  Ricky Johnson, our tour guide, had previously taken us on a kayaking tour and now we were headed out with him for an all day excursion of a part of South Abaco that is  largely inaccessible without a jeep or other off-road vehicle.

Four of us had never been to Hole in the Wall. Two had visited there many times over the past 30 years.  We were all excited to be going.

It was a beautiful sunny day, actually a great day for swimming and fishing, but we had other plans.  We were picked up right on time, we piled into the car with our packed lunches, sunscreen, bug repellant, walking shoes and long pants, which is unusual down here.  We are more likely to be found in t-shirts and shorts or swim suits, but this was going to be a hike and we were all dressed for the occasion.

We started our trip by taking a paved road going south until we hit the big fork in the road.  To the right, one headed to Sandy Point continuing on the paved road.  To the left, we headed off the highway onto a two track dirt road for the next 14 miles.  It took us almost an hour and a half to traverse those 14 miles as the car turned right and left, bouncing and bumping while missing big ditches, potholes, scrub brush and some muddy waters.  Then, finally, we arrived.  We hiked the last half-mile as it was too difficult for the car to go any further.  We were all happy to start walking. It felt good after all those bumps.

While heading toward the lighthouse, we identified some very pretty mahogany trees by looking at their fruit, looking like tennis balls attached to the branches.  Eventually the fruit turns brown, then splits at the bottom sending out numerous one-winged seeds to scatter.

We also found some wild coffee bushes sitting along the edge of the road. 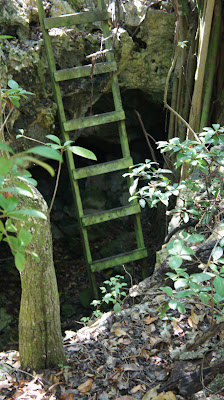 We turned off the dirt road after a bit and headed on a footpath through the bush to find a bat cave with a ladder stuck in it.  We saw footpaths surrounding the cave and realized that it was a system of caves.  My husband remarked that he saw no evidence of Batman living there.  But we could smell evidence of bats living there!  After checking out the cave a bit, we returned back to the dirt road and headed for the abandoned lighthouse. 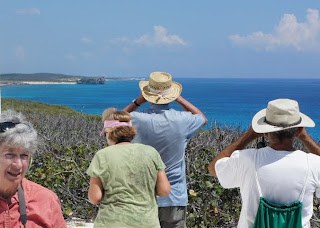 Periodically we looked back at the vast expanse, then headed on until we reached the foot of the lighthouse.  It really didn't matter which way we looked.  The view was unbelievable.  We were overpowered by the immensity and color of the ocean.


Far off in the distance we could see the beautiful birds called  White-Tailed Tropic Bird  or "Long Tail" soaring above us with their exceptionally beautiful tails. Out in ocean, in the distance, we saw huge cargo ships.

"Where is the Hole in the Wall?" I asked.  Ricky suggested that we hike down to see it, so four of us took off with him down toward the ocean. Two stayed behind and rested in the shade of the massive lighthouse.  For those of you who are interested, additional information about historical maps of Hole in the Wall, look here .

At first the hike was easy as we followed a cement path through a maze of sea grapes and then hiked further down until we reached the beach.  We took a left at the beach and started hiking across limestone that was full of potholes and sharp edges.  We walked carefully through the maze until we reached a point where we could finally see the Hole in the Wall. 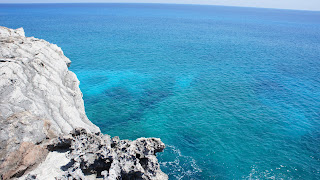 The sea was calm that day, so there was no frenzy of water shooting through the hole.  However, it was still magnificent and awesome.  One could feel a sense of power emanating from the place even  when the ocean is calm.  Looking down at the ocean, we saw an incredible aqua blue that is hard to describe, even with photos. 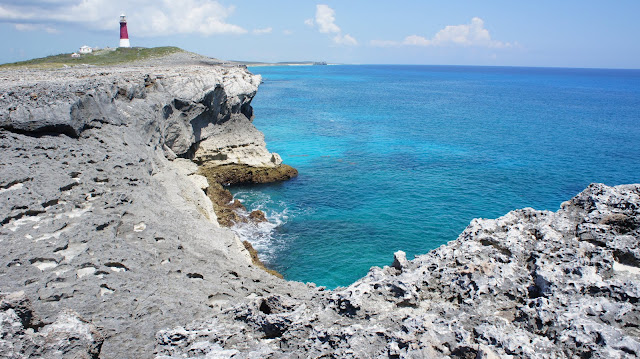 We then headed back across the limestone craters and up the hill to the lighthouse.
One suggestion I have to any beach comber who takes this hike.  Wear your walking shoes! 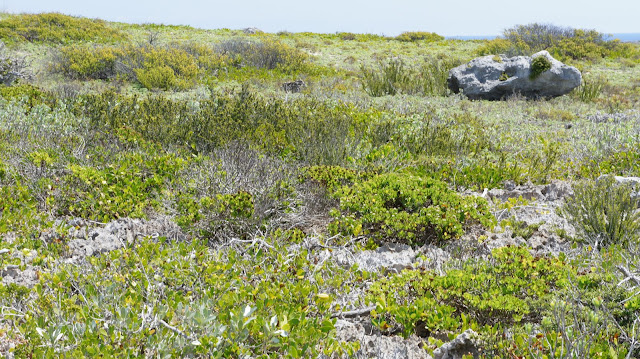 The meadows were also beautiful on the way back and the hike through the sea grapes was special. Without their fragile shade, we would have been wilting from the sun. The views of the lighthouse throughout were stunning.

The lesson that I learned  from this tour is that the Hole in the Wall is a place where one could spend many a day, just appreciating the sense of nature's power and enormity.  I can't wait to return.